Common parlance has that there are but five pillars of Islam: the testimony of faith, establishing the prayer, paying the obligatory charity, fasting in the month of Ramaḍān and making the pilgrimage.  The famous traditions carrying that wording are reported in almost all notable collections of ḥadith.

When it comes to the citation, usually it is the narrations reported on the authority of Ibn Umar, son of Umar ibn al-Khaṭṭāb (may Allah be pleased with them both). It is a continuously recurrent tradition (mutawātir) from Ibn Umar and has been reported by a large number of the trustworthy narrators from the successor generation to the companions, the Tābi’een.

Curiously though, the actual word pillar (Arabic: rukn, pl. arkān) is noticeably absent from all the reported texts through which this has come.  Furthermore, the word ‘only’ (Arabic: faqaṭ) is not part of any reported text.  Usually in the English translations it is either inserted into the main body of the text itself, or marked by parenthesis.  A literal, more accurate translation of the wording simply renders this as being: ‘Islam is built upon five…’

Does that mean that the Deen of Islam only has these five-stated things?  While no one would say that expressly, it very often does seem that to many minds Islam is only these five-things.  Much has been written on this topic by previous scholars.  Notably, the acclaimed Imām, Abu Ḥātim Ibn Ḥibbān pointed out that one of the features known in Arabic is that when something is enumerated in this manner, it doesn’t mean that it is to the complete exclusion of everything else. By looking at this matter carefully, that can clearly be shown, as Ibn Ḥibbān also notes, with regards to the characteristics or underpinnings of faith (al-‘Imān).

Upon a closer inspection of the corpus of the Prophetic Sunnah, we find that the wording of the ‘five pillars’ narrations is not actually completely uniform.  There is in fact variance in the reported wording, often with variance of emphasis; other areas being cited as one of the given five.  Some scholars have highlighted this point in order to explain that the Prophet (peace be upon him) did not enumerate all things in one given sitting.  Rather, he would mention a short number of points so that these could be easily understood and memorised.

Also with this, is the description of the testimony of faith (al-Shahāda) as being one of the items Islam is built upon.  Yet it is far greater than that; being of the upmost importance, it is the basis and foundation of Islam itself upon which everything else will ultimately stem from and be built upon.

Moreover, it is also difficult to precisely discern whether the narratives relating to the ‘five pillars’ are based upon the narrator(s) hearing them directly from the Prophet (peace be upon him).   There has been a noted contention that narrator(s) are not direct eye-witnesses to the event, but have rather made the deduction based upon other famous traditions to which the senior companions were in attendance.  The subsequent reports are thus based upon them taking these narratives from such senior companions.  One of the most obvious examples of this, is one of the renditions of the ḥadith of Jibreel, where Ibn Umar says he is narrating from his father.

There are also several other narratives that are crucial to this topic overall.  In many reported ḥadith which are authentic, the limit of five is not there at all.  Rather, other companions of the Prophet (peace be upon him) have narrated several traditions that explain Islam is made of ‘shares’.  These narrations cite other important aspects of Islam, and the variance in reported wording lists these from between eight to ten different shares.  While the common known matters are mentioned (prayer, fasting, 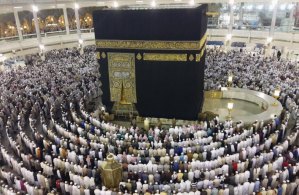 charity, pilgrimage), other important ‘shares’ are enumerated, as well as whoever leaves out a share, has indeed lost out.

Together with that, there are also the narratives that outline Islam as being both a guidepost and a lighthouse.  Those traditions also enumerate the various pillars, shares and rituals that underpin Islam.

The text of the Qur’ān cannot be neglected in any serious discussion of this topic.  It reinforces the core pillars, shares and rituals as outlined in the Prophetic Sunnah.  But it also provides some further emphasis upon areas that have regretfully been relegated to mere academic discussion. Of great important – especially politically, is what the Qur’ānic text has established concerning Shu’ra.

In order to consider this matter in greater detail, as well as looking at all the various narratives in this regard, we present a translated chapter entitled: The Basis of Islam and Its Essential Pillars, from Volume 1 of  Kitāb al-Tawḥeed by Professor Muḥammad ibn Abdullah al-Mas’ari.

Each of the various points that have been mentioned in brief here are elaborated upon.  The reader can therefore see from this chapter, that the pillars, shares and rituals of Islam are in fact greater than five.  And indeed, some of these have, with regret, slipped from the forefront of most minds today.  Perhaps a reemphasis of all these pillars, shares and rituals can see them being revived to the fullest.